I woke up about 1/2 hr ago wondering if it was still Tues or not. The time said 647 & it was dark outside, but I still didn't have ANY clue. I'm feeling better this am. I can feel my energy level is up just a tad from yesterday too. This is the scoop:

Monday began as a normal day. Lele had to stay home bcuz of the whole potty issue (when is that going to be over?! Poor girl.), I had a dr's appt, blood work, stopped by store for juice, took Lele for an Xray and came back home. Even p/u the girls from school. 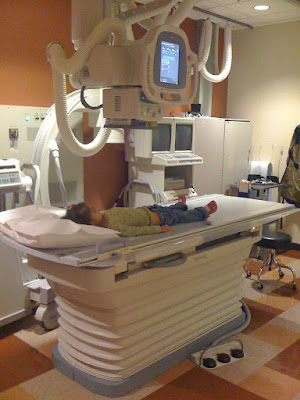 She looks so tiny on this thing!

We all had a good nite & I even went to bed early. (Clue no.1) I woke up about 1230am (right after I had a dream I was at my mom's house, & had to run to the bathroom to throw up! Clue no.2) my stomach felt upset & sure enough, I had to run to the bathroom & get sick. Crazy huh? Well, when this happens to me, I ALWAYS end up in the ER. My sugar drops, the sweats, I'm out of it, it's violent & ugly. Graciella woke up & helped me a little and even called daddy to see where he was. In between me getting sick & trying to figure out which end was next, I texted Carlos at work. He left early, came home & called 911. They are located right outside our neighborhood, so they were here in a flash. Cute scenario. All these EMTs & firemen come in & I'm sitting on the toilet, throwing up at the same time. C.U.T.E. (I know you didn't need a visual, but it was a horrible nite) A woman fireman gave me a IV in my arm, that later blew up my arm, like I've been on steriods for 2 yrs. My BP was low (this is a first). They took me out on a stretcher (that Lele told the girls was called a gurney. They saw mommy being taken out of the house) Harley (our puppy) tried to get to mommy in the bathroom & succeeded a part of the time, just to be next to me... even w/all these people there. 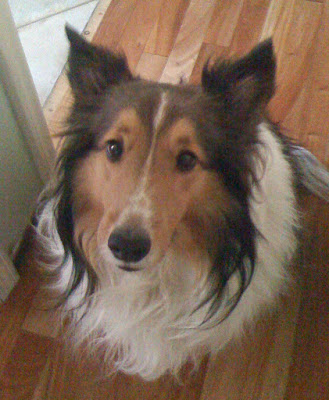 I left in barely anything, covered me up & rolled me out. I did get sick again 3 more times. This brings the total up to 9 times in 2.5 hrs. Fun. Finally, the Zofran kicked in. Carlos stayed home w/the girls bcuz bringing them to the ER would of def gave them something to go home with. I was okay w/this. My only thought was if the nurses would tend to me if I needed something, bcuz they get so busy. I wouldn't have my hubby there to get after them. That thought quickly vanished bcuz ALL was good. The drs & the nurses. Strange thing though, they were ALL men that nite. Hmm... anytime I needed something, they were on it. Didn't deny me my ice chips either after my throat felt like it was ripped out! After the bloodwork, new IV, BP, more Zofran... Carlos came to get me about 830 or so. Bill (my bffs hubby) came to stay w/our sleeping beauties.

I got home & crashed on the couch where I slept on & off all day. I had to give Lele new meds to help her w/her potty-deal and it ended up working a tiny bit! Any progress is good. She's missed too much school bcuz of this. She's fine but the one day I send her, she'll end up in the potty, by herself, screaming. Too scary.

My meals consisted of about 10 crackers & 3 grape G2s all day. Bill had cooked for us & brought it over. Man, I do I love these people. (he called Carlos too late in the am, after he saw the ambulance pass his house, to see if it was me.) He and his wife are always there if we need them. You would be lucky if you had them as bffs & neighbors. =) When I saw what he brought over for dinner, it was enough to feed a small army! Two chickens, stuffing, mashed pot, gravy & corn. All of it, piping HOT, ready to eat! THX SO MUCH BILL! The girls all ate, even Lele. Antonia had seconds too. It was much appreciated.

So this all brings me to today. I'm hoping for the best. The girls have soccer today. It was cancelled yesterday. YAY! Due to the fields being too wet. Perfect. I just wish Lele didn't miss all the fun things her class has got going on now, w/the holidays. Her teacher sent this mini-gingerbread house home last wk for her. How cute & thoughtful! Each day they are learning different traditions & things are being sent home for Lele. THX Mrs. Lang! 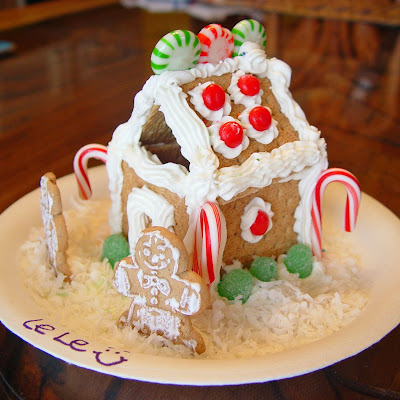 I'm off to start my day. Back to the hectic, crazy schedule. I feel hungry. This is a good thing.
xo

What an ordeal! I hope you're doing better soon!