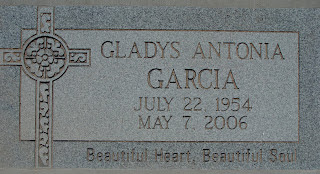 Today is 2 yrs that Gladita has passed. I still cannot believe it's been only 2 yrs. If feels, still, as though she is away on vacation & will be back any time. We go to visit her at the cemetery but it still didn't feel real. Until today. We got there & her marker had been placed. We were excited. It came back perfect. I was afraid something may be spelled wrong or the wrong name... But seeing it made it all seem REAL. She's REALLY not coming back to us. Ever. I walked around since this am, w/a huge lump in my throat & a big headache ALL d 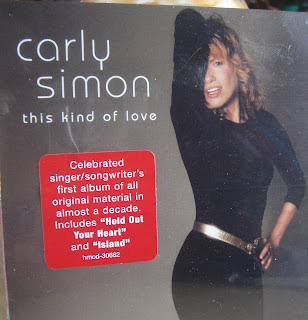 ay (so bad, that I felt nauseous).
Things always happen in threes. This am, I had to run to Starbucks to buy gift cards. First thing I see at the counter - a Carly Simon CD. Huge lump in the throat & tears. Take a deep breath, I can get thru this! (Gladita LOVED Carly Simon & she named her daughter after her!) I spoke to Carrie soon after & told her what happened. She told me that she had texted Carly & Whitney earlier & they both texted back! (more tears) This is earth shattering! Was at the store p/u flowers, balloons & cupcakes for Gladita. (couldn't make it thru the store w/out more tears) The woman made the flower bouquet so pretty, then the colors of the balloons were so bright, just like Gladita liked. Got the cupcakes to celebrate the life that she had & not the fact that she was not here w/us. Lit a candle & said a prayer as we all held hands. I wish Carly could of made it. She was the only one missing. The marker was placed... this all works. Gladita found it was funny to pop the balloons while we were there! Ma was getting mad at me bcuz they were popping. Gladita, I know, was saying "ha! ha!"
Today was also the day of Spencer's mom funeral. Sad. I wish I could of flew out to be there for him. He's a super nice guy. Here's that hard hug I told you about Spencer!!

Graciella had her chorus concert tonight, but she choose to go to the club soccer tryouts. I'm proud of her. She did so well & the one coach that knows her from practice kept talking to her & taking notes. (this comes from a reliable source...Graciella!) Her next day of tryouts is Friday then Sat. afternoon. Sat. nite, the coaches will be making calls! Keep your fingers crossed!