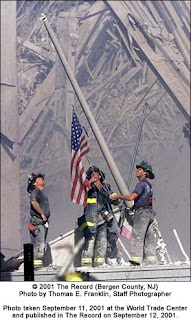 It's been 7 years ago, today for 911. Time flies. Once again. This am on the way home from dropping Lele off at preK, the radio station played a montage' of phone calls to 911. They were the voices of the people still trapped in the bldgs on the higher floors. I wanted to turn it off but I couldn't. The 911 operators were telling these people to NOT leave the floor bcuz of a fire on the floors somewhere below them. Help will take awhile to get there & to just wait. Break out windows to get more air, another girl was told. Wow. All I could do was sit & listen & not move. They played Heaven by Bryan Adams w/a girl singing real slow. In between some of the lines, a little (who lost her dad on 9/11) would say I miss you & other things. Once again, I couldn't stop the tears.
It's amazing, that after all these yrs - you just have to stop & listen. One thing I still cannot do is open a book we had bought back then '911'. It's a beautiful book we bought as Costco. Just filled w/photos. I still haven't sat down & looked or read thru it. I know I'll just cry & one would think after 7 yrs I could. Nope. Not yet. My heart still breaks for all those people. All the lives lost & the people who are still here. It takes me back to that morning when my sister (who has passed since) lived in Newark, NJ on this big hill. She was standing in her street watching it all happen. But thank God, she was far enough from harms way. But thinking of her voice, how it sounded, watching it on TV at the same time, crying w/her, waking up Carlos to look what's happening... it's all horrible & still hard to believe it all.
Here's a web site that had reporters, photographer's stories & lots of photos if you want to take a look.