Once again, soccer ALL day. First thing this am, was Antonia's game against a Nevada team. Found out afterwards that they played up. They lost 8-0. These girls were good---. We hustled right on over to Graciella's game that had started already & they were winning! They were playing an ex-teammates' team. They KILLED it! 5-0. It was an awesome game bcuz coach switched positions & some of the girls who never get a chance to score... DID! Graciella has a game first thing in the am & Antonia plays around lunchtime. If the 98s win? They play again about 12. The 98 girls could TAKE it!!

A friend from 98 Blue came home w/us to spend hectic day w/our familia! We were home for a quick minute for Lele to get ready for her game, then it was off to fields. Except on the way, it started raining. Got to the fields, heavier rain & all the games were cancelled. Nice. From there? Straight to PeiWei. Yum! Home it was, laundry & the girls relaxed for a few hrs, movies, popcorn, making 5 y/o cry. Did I say that? It was only an accident. ha! (Not by me though! By one of the girls I swear!) Left to Antonia's game & the sky was somewhat clear & sunny. 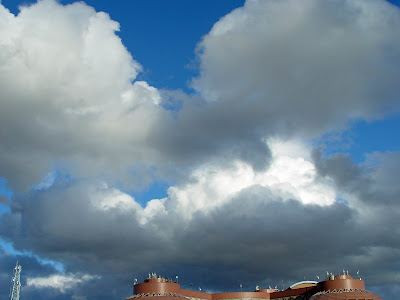 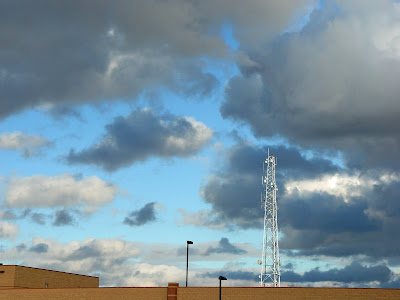 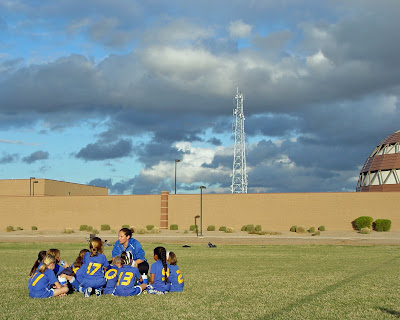 Coach Shaye & our girls at half. Antonia is #13 =)
I know, lotsa cloud of pix but IRL, they were so pretty!
They lost this one, pretty good game but they should of won this one! So frustrating to watch sometimes! The highlight? Our awesome coach stood up for our girls against this ego-trip-having ref woman. One of the dads got heated & the Field Marshall got involved. He was some help, let me tell you. Him in his orange t-shirt & repeating 'ya have to come down'. He was the instigator at one point! All ended well & on a good note, our girls were happy & off we were again. This time it was home to get things done for the am. As soon as the game was over, more dark clouds rolled in & started drizzling! Yes.

Wish my girls luck for manana & I will fill you in when it's all over! Have a good nite & sweet dreams. Speaking of which, my girls HAVE NOT  been sleeping in their OWN beds! I can take it but the hubby's back gets all jacked up when it happens! The excuses are different every nite between the three. Someday I'll list them all & hopefully someone can give us some tips & tricks to solve this! Someone will be going to camp this summer. I'm afraid for her to go!! Although in the past, she's never had a problem but lately TOO much is happening!!