After this am's game, the 98 Girls came through! Final score 1-0 us! YES! Girls were happy campers & Graciella left w/a teammate for some lunch. Thx Sandy! This worked bcuz we had to be back at fields for Antonia's game. (which BTW, they lost.) 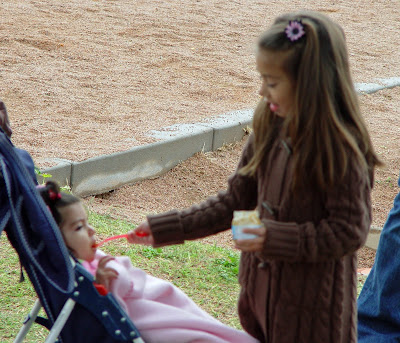 I turned around so quick & snapped this oh-so-sweet moment of my little one feeding this little baby girl. I'm guessing this is why it's blurry! It was too cute though! 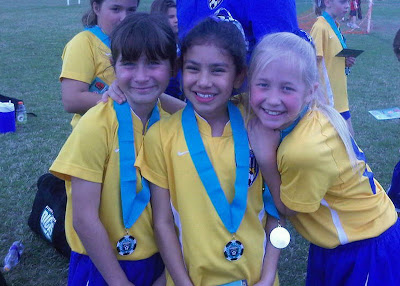 (LtoR) Katie, Antonia & Jayna
Way to go girls! Coach Shaye & Jeannie told us how hard you all played! Thx Jeannie for the pic! xo
Graciella's team was up against AZ Fury. The very team they beat Fri nite 4-1. The game ended w/a score of 0-0. They played a 10 min OT game. Final score? 0-0. PKs came into play. They beat us by 1 on this. Not fun. It crushed our girls. They played their hearts out, rain & all. Bloody nose, banging head on ground, hurt wrist... the girls didn't give it up. They all came through the line w/tears rolling. Right there, I almost lost it. I hugged a few of the girls & my heart was breaking and the tears rolled. As soon as it was over, the rain came. Again. The coach talked to the girls, handed out the medals & pins and I wasn't too thrilled at what he had to say to Graciella afterwards. Well, after the game. WTH?! What was he thinking?! So over this. I asked a mom to help me rally girls into taking a photo bcuz at this point, all they wanted to do was climb into bed & cry. They should be proud! They made it to the FINAL 2 teams in the Championship Game! It was just not their day to win this. I so wish it had been. =[ 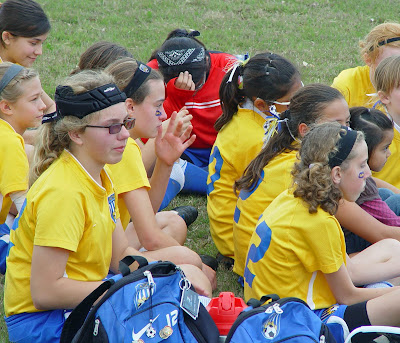 I debated whether or not to snap this. It shows the girls' mood right after the loss. Amree, our goalie is the one in red & she is AWESOME! I'm hoping she doesn't take this to heart & blame herself. The tears were still rolling at this point, as they tried to listen to the positive words from their coach. **Notice the girl in the upper left hand corner of photo. Doesn't she have the sweetest smile? After leaving fields, Graciella told me as the team was in tears, Paula was saying to everyone 'Guys! We got 2nd Place! Yes!' No need to explain what the rest of the team was thinking! I was told this was her first tournament medal & she made her first goal EVER in THIS tournament! Regardless of the day's outcome, she was a happy camper. =)
98 Blue, be proud how far you made it in tournament! You played your hearts out! Second is not first, but just as good! Truth be told, you tied game, you tied OT game & lost in PKs. You didn't lose any games girls!! We're still so proud of you!!