Many of us, this season, have countless soccer games/practices to attend. Well, HOW many of you are practicing to play in a Turkey Bowl?! My daughters' club is having this special event, one time, one nite only, game for all us moms. We play for our kids' team & the winning team will win $$ towards a tournament! =) We play against all the other moms.  We play two games but after that... it all depends on how good your team is! The nite can be cut short, but I'm hoping the stars are aligned that nite: so 98's can win! We started practices last week & we have a pretty good team! Wish me luck! (I am so outta shape!) The girls have practice every week from 530p-7p Tues, Weds & Thurs. I'm telling you this bcuz THIS is how often us moms will be at it too! I'm hoping I can stick it out! 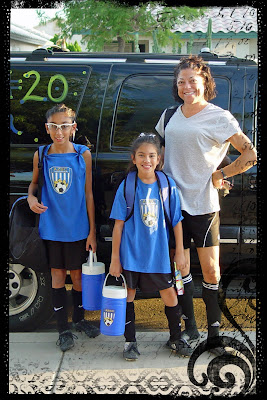 Friday: was a busier than ever kind of day. Kids went to school at 11am. I had to be back by 1245 for a field trip. So this gave me little time to head to Justice to buy a bday gift for Antonia's party. The Kinders were walking to Mother Nature's Farm right up the street. Do you know that even in late October, it was HOT! We all were in shorts & I forgot to put sunscreen on Lele's face! (she didn't get any sunburn though!) So after walking around, a bumpy hayride, decorating pumpkins, jumping in the bouncy house, checking out the animals... we p/u the girls at 4p & drive straight to Antonia's friend's bday party that is from 4-6. Next, drop off daddy & Lele at home. Graciella & I head out to Tilly's to shop for her friend's bday gift. We finish there, run to the car, wrap gift & head to another friend's house bcuz she was to ride over w/them for a surprise party from 630-10p. Whirlwind of a day, I tell ya! I drop her off, head home & call my mom on cell... I just happened to see the time 625! Ah--! I had to p/u Antonia at 6. Hang up w/mom & call party while doing a U-turn. All was good though bcuz girls were still playing. Yay. A few hours later, I had to p/u a mom & her and I drove to party together. We took a detour at 945pm to look at these huge, gorgeous homes. =) Finally made it to party, most of the girls were from the soccer team. All but one. Us moms must have stood outside & talked for almost 45 mins before it started getting chilly out. Afterwards, drove friends home & finally walked in the door about 1130 or so. 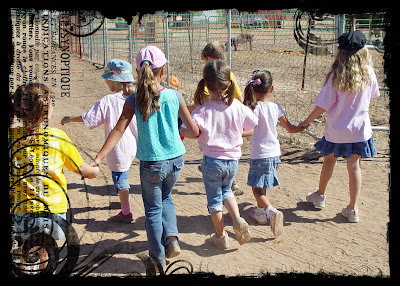 I thought the girls were so cute walking together! Lele is the tiniest one! 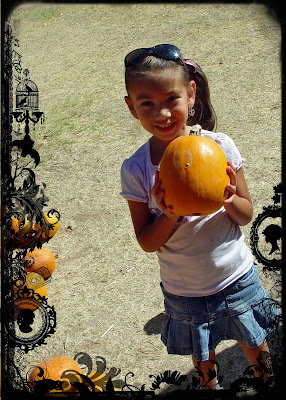 Doesn't my mama look too cool w/her shades? she didn't want to wear them!? 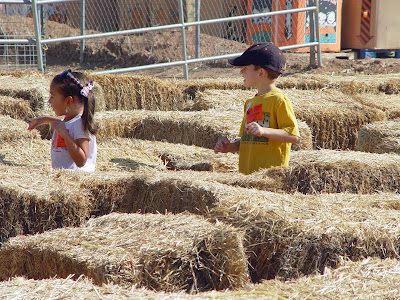 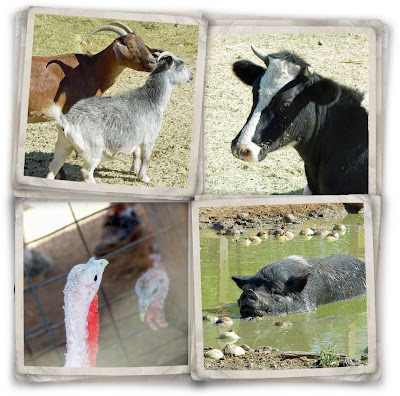 Hello animals! I think I enjoyed seeing these guys more than Lele!

Yes, and this is usually how my days go, one thing after another. =)

Saturday: Leleanna had her game first thing in the am. Had to be there at 830am. Thunderbolts did a great job & won! Lele scored 2 goals & the other team even scored  2 goals -  for us! ha! 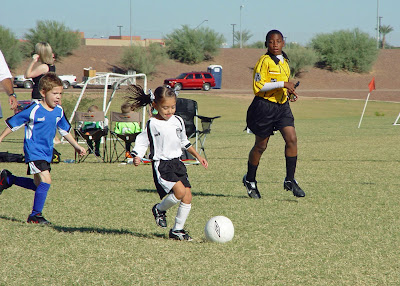 You see that funny face of hers? She gets in a zone & her tongue will hang out like Michael Jordan! 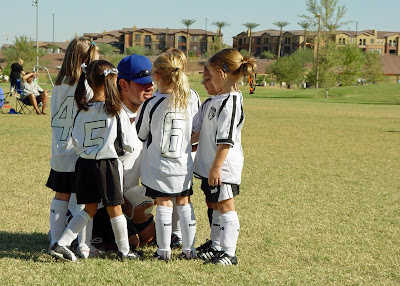 Coach daddy & his girls! You can barely see him, but the only boy, Matthew is in the back right! 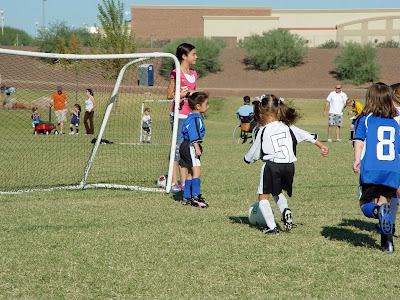 Here's goes Lele to score but WHAT are the other kids looking at?! 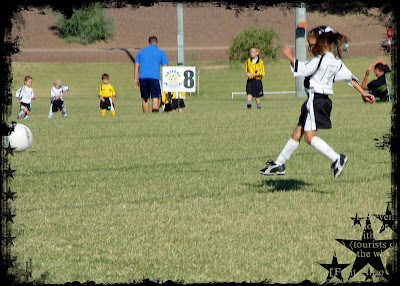 Check it out! Both Lele & the ball are OFF the ground! I love it!!

She is one hard kicker, my mama =) 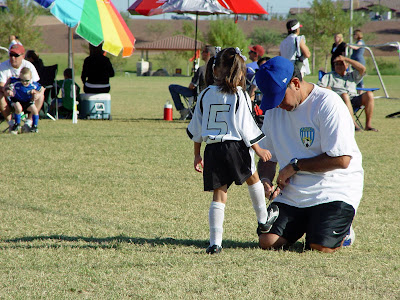 After her game, Graciella & I headed out to shop for her costume. We lucked out & found NOT her Bollywood costume but came up w/another. She was going to look cute or 'groovy'!

Antonia's game was sched for 230p & she had to be there at 145. Fun, I know. It's not even summer & this heat! Jeze. Well, daddy had our canopy set up when I got there. Without it, we would of been toast! Okay, so why put a girl in goalie if she NEVER played that position before. Yeah, they're just girls but why not have her attend goalie training for a month or two first? This is not rec people. I'm sure she was plenty nervous too! Two goals later, she was switched out. Our girls dominated that game. It didn't help them though w/this ref from another planet. My Lord! He made bogus calls. Spoke to & coached our girls. An idiot. Period. Ugh! Bcuz of his dumb*** calls & a few minor changes, he cost our girls this game. They so-- should of won too. 3-2. Whaddya gonna do. Girls played hard & everyone learned from it. 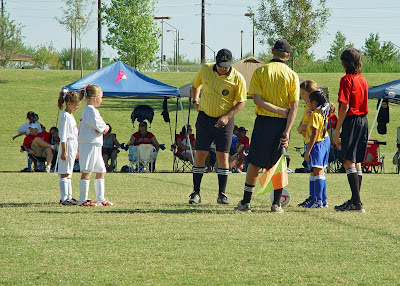 Antonia's team went up against her old club team Legacy! She tried out, made this team & moved to another club before anything started!! =) Best move ever! 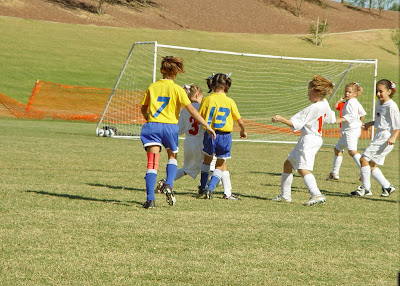 Next on agenda? Block party. Carrie, Rob & Gia met us at park for a minute before we had to head home & get ready! Girls knew party started at 3, so they wanted to hurry & get ready. Party started at 430 for us, but the girls ended up having fun. Met some neighbors for the first time! Gia looked too cute & she was so well behaved (for a 7 mos old!) She is truly a good baby =) 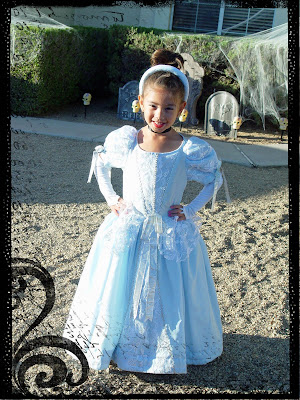 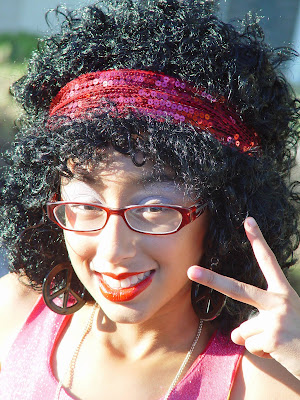 (Hey Rose, her hair looks like yours in a good way!) 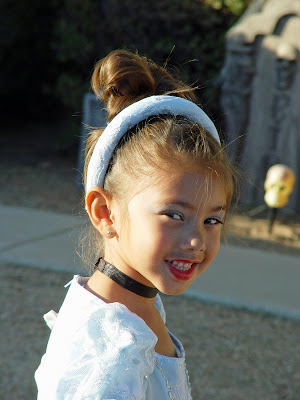 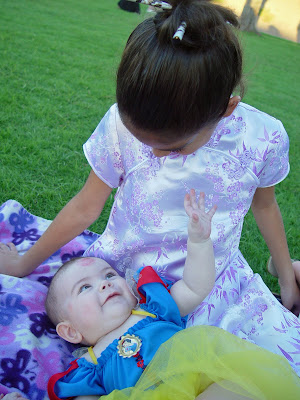 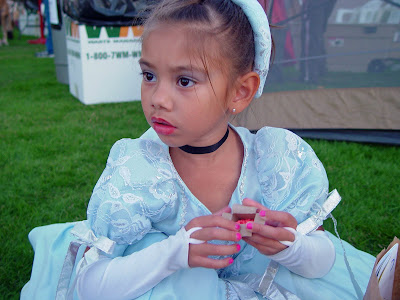 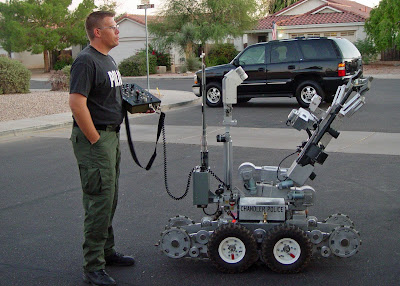 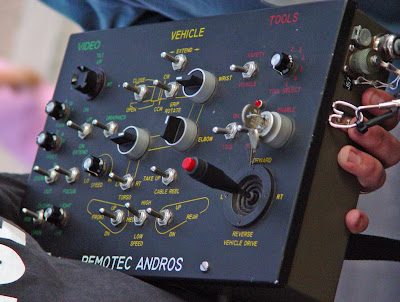 Some Wii remote huh?! You can even shoot a real gun w/this! It was pretty cool what this robot could do! 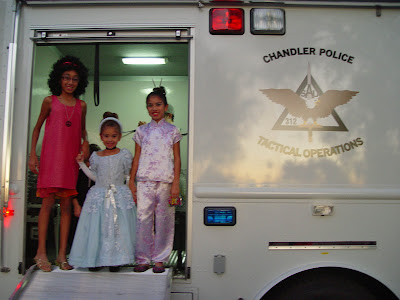 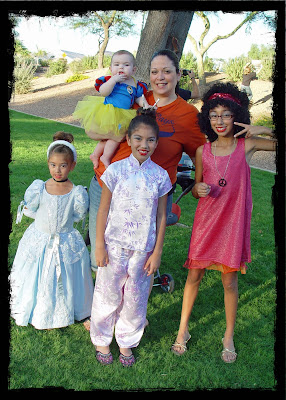 Afterwards, headed home & changed. Made lotsa popcorn & watched this w/the familia: (yeah, we had to fwd thru a few parts while the girls covered their eyes!) 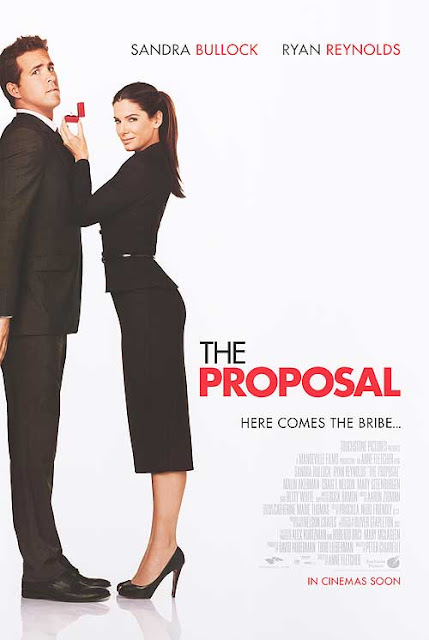 Sunday: we met up w/our oldest, Melina & her bf at a park (that just happened to be having a soccer tournament!) So great to spend time w/her! We all had fun playing soccer (I know, finally a day OFF from soccer & what do we do?!) & the boys (Min too) were throwing the football. We had brought fresh bagels & cream cheese, yum. Again, another hot day! I didn't plan on the sweating part! Thx Min & Patrick for the grapes =) 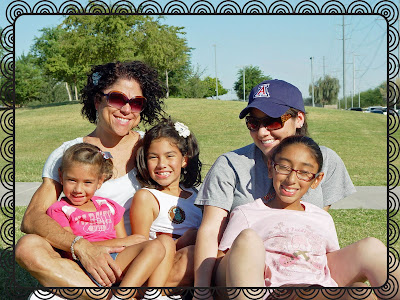 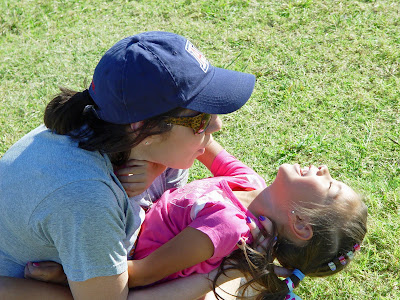 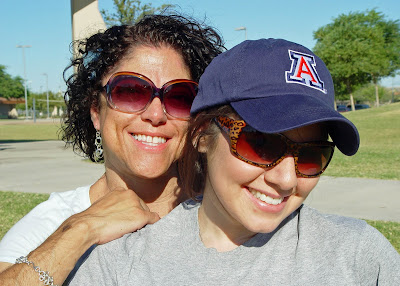 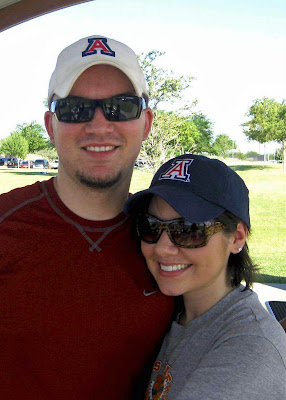 Tuesday: Saw this guy & his cool car on the way to practice. Don't know what was so special about that day, but we saw lotsa of old cars like that puttin' around. 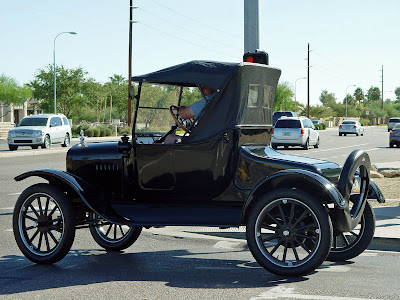 Yikes! Those are a lot of pictures! Sounds like a great (busy) weekend.

Julie! I thought about you this Saturday!! I wanted to text you but don't have my SMARTPHONE yet-no not an iphone Verizon doesn't carry them and I don't wanna switch, ANYWAY....
I'm loving that you are playing soccer! The only time I get to play is when the parents play the kids on DD team. Someone asked me the other day if I would play an adult league, ha! When do I have time?!
okay the proposal! I watched it with DH and WE had to close our eyes and fast forward!! It was cute though....okay, LONNNG reply! Good to "see" you!

i love the soccer photos - and what a fun idea for graciella to be a 70s girl! i'll have to remember that one. ;D