Sunday morning, we met up w/a few couples & went for a ride. Gorgeous day to do it (not a cloud in the sky!) & it got hot! I didn't think to put scun-screen on (as Antonia calls it!). Oops. Our first stop was Four Peaks Brewing Company in Tempe. I had this huge mushroom & Swiss burger w/these beer battered fries?!!! YUM---MEE! Finished it all but one tiny bite! ha! 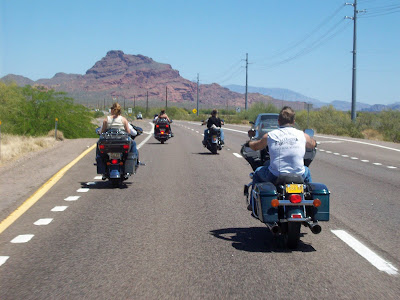 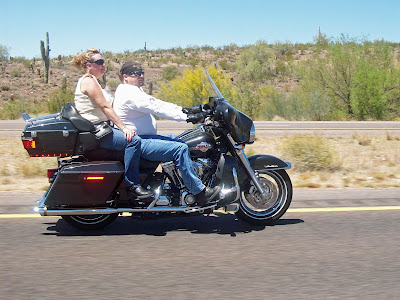 Next, we took a little ride & got on the freeway towards Saguaro Lake. We made a quick stop at this little beach on the lake. The women we were with reminisced about coming here in high school & getting trashed! Hmm... not me! I was too busy for all that! I grew up back East too. I never understood what the big deal was to drink till you puked!? However, Carlos & I took some self-pix. I'm excited! We so-- need more pix of him & I. We have barely ANY! Sad I know! But I made a promise to myself to just do it & take them, regardless if it's not a good hair day or whatever! NO EXCUSES! We've been together so long & we honestly don't have the tons of photos we should have! Sad. Here's one from that small beach. 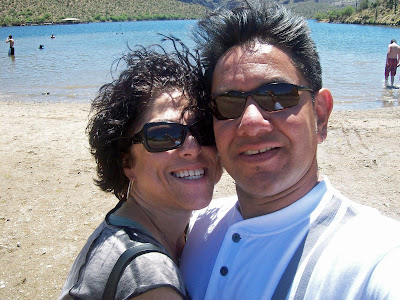 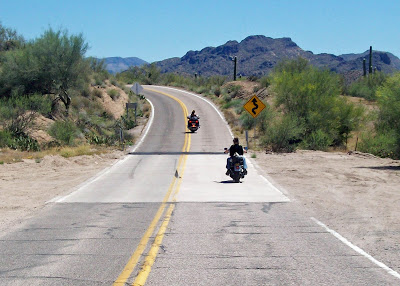 See the road sign?! Take note of that & how much or LACK of a shoulder, there is... 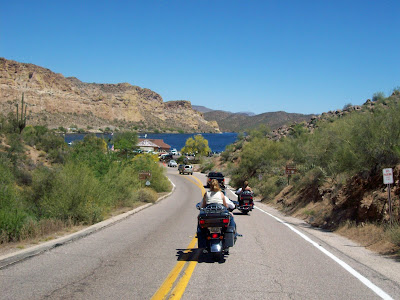 Next stop, Lakeshore Restaurant right on the lake. Nice views. Patio & steps leading down to the marina. Everyone drank beer & I got a Rootbeer float w/some powdered donuts! I felt like such a kid! Oh well. Beer is just nasty! Soaked up the view of the water, mountains, boats, jet skis... it was beautiful! (I thought to bring the girls back here, they'll love it!) I can go there everyday! Great photo-op for that self-pic! =) 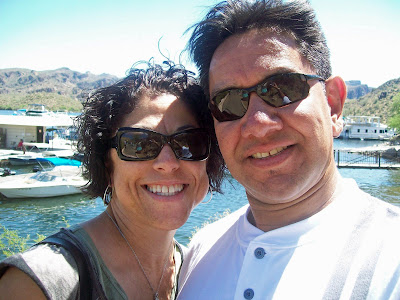 Here's a few of the other riders: 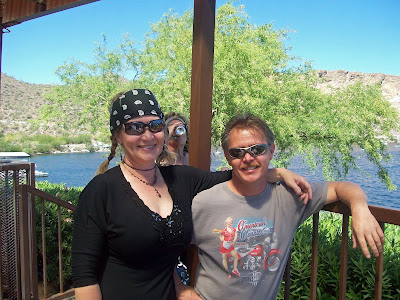 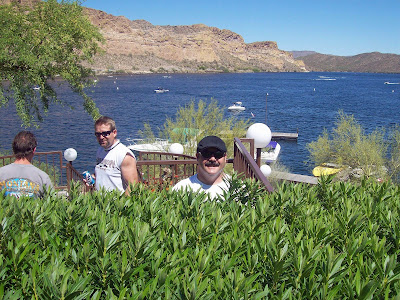 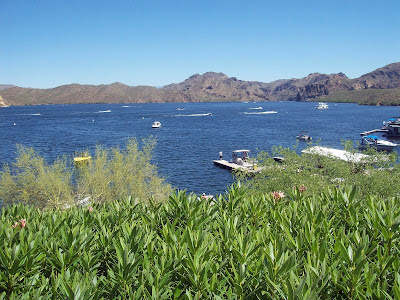 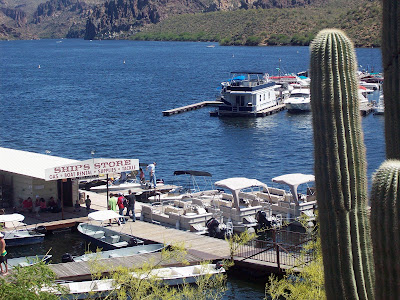 We hung out there for awhile & headed out through the curvy, hilly roads. For SOME reason at one point, I saw that our bike was TOO close & over that solid white line on the shoulder. I also saw the pavement had big chunks missing from it w/sand & small rocks. My reaction was to raise my butt off the seat so I wouldn't hit these bumps hard. When I did that, Carlos felt me get light & couldn't turn the bike back towards the road. I thought to myself, I have to jump off this thing bcuz NOW we were hitting those missing parts! I wasn't scared, I just was thinking of a way to jump off! (luckily, we weren't near the parts of the road that just go downhill towards trees or cacti!) Carlos handled it like a PRO! He saved us! Whew! His ankle got tore up from the floor board & rocks but other than that... NO SPILL! That was a thought! This is why I was going to jump! I didn't want this huge, heavy Harley Fatboy that had a hot engine & pipes rolling OVER ME! But Thank God, it didn't come to that! I just got off & sat on this rock for a few mins. The other riders had turned around by then & rode back to us. The guy behind us saw the whole thing. He saw me come so high off the seat & he thought we were going to spill! He told Carlos he couldn't believe he got us out of that! He never saw riding like that! He's done it twice himself & it didn't end up like us! He came over to Carlos, shook his hand & gave him a man hug! The couple in front of us, saw us in his mirror & got worried too.

Surprisingly, my adrenaline didn't kick into high gear. Had that been the case, I would of been possibly air-vacced out of there. Nice huh?! It's happened in the past. Adrenaline kicks in big time & I'm off to the hospital via ambulance! I wasn't even shaking afterwards. Carlos said that he was thinking of how to steady the bike over the broken up road & not having my adrenaline kick in. I LOVE THAT MAN! He saved the day! Wow. We were lucky.

So-- off to The Monastery in Mesa. (by Falcon Field) Little ride to get there. Gorgeous out! It was pretty cool place. Neat-o! hee-hee. They had an inside bar & outside tables, bar, band, ping-pong tables, volleyball sand-courts, bench swings... you can buy meat there & cook it yourself outside! We sat outside & saw this PINK firetruck pull up. Yes! I grabbed the camera & left real quick to take pix! They were having a 'boob ride' (I read a sign inside the bar!) to raise $ for this girl that worked there. We also heard 200 bikers were coming. ??? No room whatsoever for bikes & people! We never saw them though! =) We had left to get truck & pick up girls from Tucson. 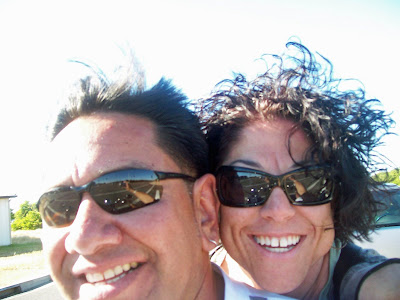 On our way home! Happy to be ALIVE! 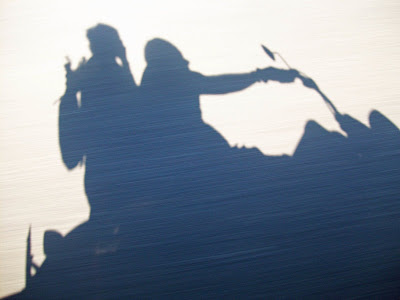 Had a headache lastnite & felt yuk. And again this am. I'm thinking it's from the sun yesterday. UGH! I have TOO much to do today! Girls had fun in Tucson w/Melina though. I'm happy they got to spend some time w/her & her bf Zach. =)

Have a good day people! xo

Fun stuff! Thanks for sharing. Your pictures came out great. I especially like the last one in shadow.