Can't believe it's here! We spent the nite at home. Carrie & Rob came over & played the Wii w/the girls. Actually, we ALL played! Ha! Carlos came home on break & brought in the New Year w/us at home. He had to go back to work afterwards though. :( Antonia & Lele fell asleep before midnite & Graciella stayed up till 315am!

Get this... the house phone rang just as Carrie & Rob were walking out the door at 315am! I couldn't believe it for one. Second, when I saw Jeannie's number, I was worried for a quick sec. I said Hello? Katie (her 7 yr old) asked me if Amy was going to come over tomorrow to scrapbook! ha! I couldn't believe it!?

We spent New Years Day going for a bike ride (it was GORGEOUS & warm!), taking the puppies to Graciella's soccer practice for a walk around the park, I did a load of laundry & scrapped some pages that I started too long ago!

After soccer practice, Payton - Graciella's friend, came home w/us. We went to McD's to eat & headed home. She spent the nite. They went to bed about 11pm. Yeah, well... that WAS the plan. I kept hearing the giggles, then one would get up & hit a conga drum then get back in bed. A few secs later, one would get up & hit another drum or symbol, then run in bed & you would hear the giggles. About an hr later, they both got up saying they were starving! They ate, watched TV & were sent to bed at 1am!

I bought Becky Higgins' Project 365! I can't wait to get it! After trying to place an order online for 40 mins, I finally got thru & got a confirmation email! YES! Many people made comments that it sold out or it was too slow. In Becky's blog, she explained that the server got slammed! You need to take a photo every day & the kit, 12x12 album, all that it comes with... you can't beat the price, plus the design, colors, ALL OF IT ROCKS! I'll share pix when I get it!
Here's an example of how it can be done! I love this! 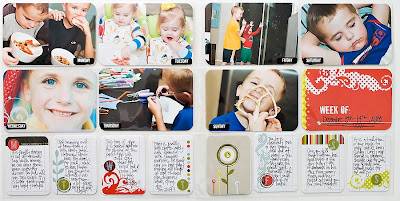