Just short of the ten year anniversary of 9/11, Osama Bin Laden has been killed. President Obama just announced tonight. From a crowd of 40 to thousands w/in a few hours! Amazing. Historical. Thankful for our military who was able to pull this off. Celebrations at the White House tonight, as well as Ground Zero & Times Square, even at the Mets/Phillies' game! I can't even imagine how the people who lost loved ones are feeling right now. I bet if I tried, it wouldn't even be close. I have CNN on right now watching thousands of people crowding together singing & holding the American flag to celebrate.
On the other hand, when we wake in the morning, what shall we expect? Retaliation on some level? What about succession? That's something I don't want to think about. Reports also say Bin Laden could have sleepers or lone wolves that have been in this country just waiting to put his plan into action upon his death. It's scary to think about. I'm saying a prayer before bed for the opposite. I'm hoping everyone does!
God Bless America. Land of the Free. Home of the Brave. 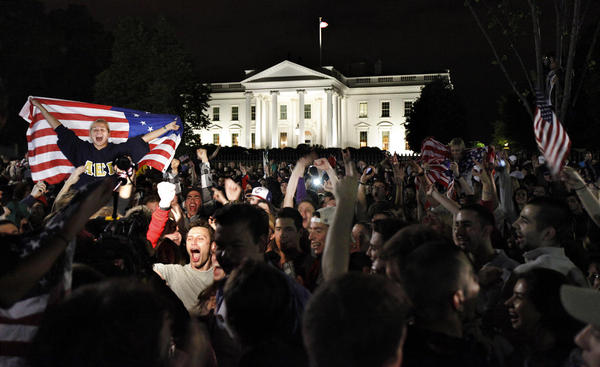 (photo source)
Yes we can!