To Fish or Not to Fish

Long story short? {sorta} We decided to go this am, it was cooler out, drizzling on & off and simply? If we don't make it happen this am? We'll never have this opportunity again! I woke up the girls & off we went! It's a short trip to Gramma's & the lake she lives on. While we were setting up & adding sinkers/floaters to the lines, the girls kept me posted on "mommy, it's raining. no it stopped. mommy, hurry! the fish are right there!" We FINALLY got started. An hour passed, more rain drops, Gramma commented on the rain...THEN Leleanna caught the first fish of the day! =) She caught the second too! 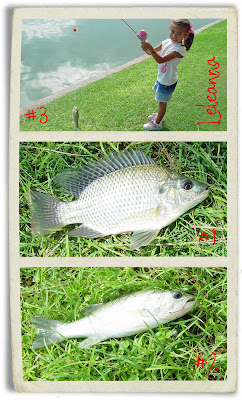 Antonia caught the next THREE! 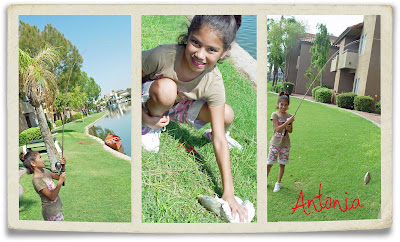 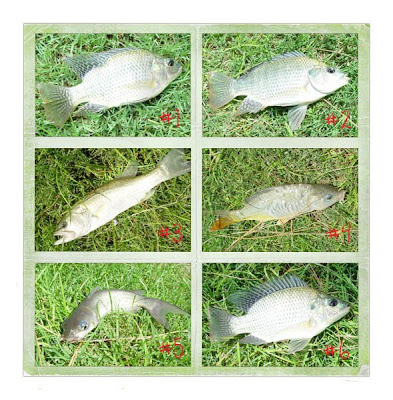 Finally, after someone above heard Graciella going on & on about NOT catching ANY fish EVER, she caught a HUGE fish! That sucker was a fighter! She lost him on the first try, but I told her to hurry, get another hot dog & try again! She GOT him! I helped her reel him in. We did the entire 'hurry take a pic, hold him down, remove hook & throw him back in!' deal every time! We lost NONE!! =) We cheered every time after a fish was thrown back in! Antonia caught her fourth. I ran up to get some snacks & we hear Graciella screaming! Antonia & I run down and Graciella's fish dragged her down the hill, almost in the lake! LOL! She just kept telling us how afraid she was! Next two caught = Antonia's. (Lele caught her third somewhere in there!) Half way thru the am, Lele went in w/Gramma & ate snacks w/her! =)

The girls had a so much fun & thanked me 100 times for taking them! We never have time for little stuff like this. Each day is soccer except for Monday & Friday! I loved it! =)