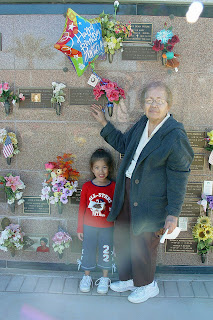 Today is my dad's bday. We did our usual ritual. This year I made cake cookies (instead of buying cupcakes), made his card, bought a balloon & a candle! Myself, Lele & Gramma sang to him & Lele blew out his candle. We took some pix too. ALL after visiting Titi first!

Today was also a hectic day! Run here, then there, pick up Gramma, drop her off at Fry's, pick Graciella up, take Gramma home & unload bags of groceries, get Lele in house still sleeping to continue her little nap without dogs barking & waking her up, pick up girls from school & fit in a catechism lesson before girls go with Carlos, who is feeling horrible w/his cold, to soccer practice, still checking in on manuf's blogs for CHA giveaways! Prima has some beautiful flowers coming out!!

This is to JEANNIE - HAPPY BELATED BDAY! We all love you! I can't believe the day came & went, even when you stopped by w/Charlotte. The words were said but simply saying the words weren't enough! How horrible am I! =( I didn't have what I wanted for you finished & ready to hand over! I hope you don't think we forgot about your special day! Then, your party is the same day as Mary's party! Could one day be blissful & perfect & full of extra time?! Not happening anytime soon. Sorry about that! I do want everyone to know how special you are to this family & how much we truly appreciate all and everything you do! Thank You so very much for being there again & again. xo 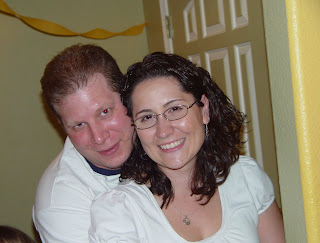 Jeannie & Bill
Saturday was crazy! Antonia had her first game (actually second, bcuz her first game we were in Tucson for Graciella's tournament). We left early for her game to Snedigar, only for me, Lele & Graciella to go to another field at the same park. Graciella was asked to fill in on a co-ed team coached by Ryan S. for Legacy. (U11 & U12) Lele & I had left her w/him & a few girls from her blue team to see Antonia play. Her game was half over, when we headed back over to see Graciella tear it up w/these boys! The girls tore it up! They're the ones who scored too! You can check it out & pix HERE. 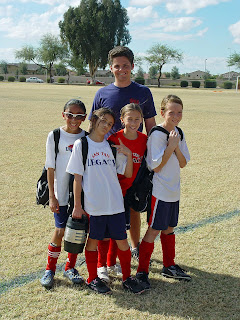 Afterwards, we came home & everyone got ready to go to Nicholas' & Haley's combo bday party. 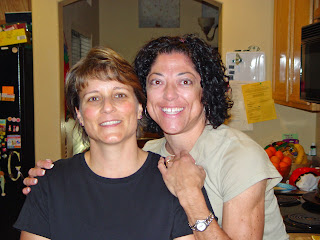 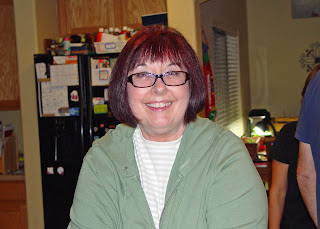 Another friend of ours, Carol - that we've known for many, many years 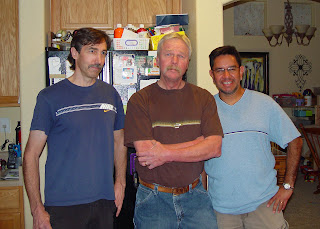 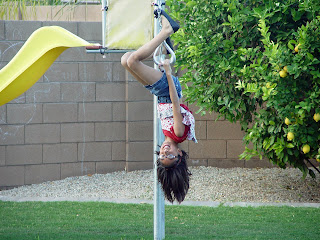 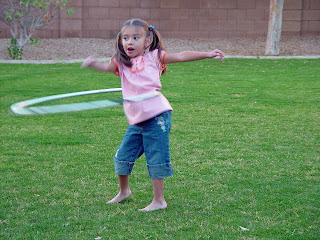 Lele having the best time shaking her tiny hips! She kept on going & going w/this thing! It was too cute! She could keep it up for a while too! 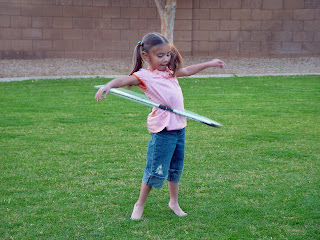 The girls had a good time & we did too - catching up w/friends we haven't seen in a while! Some time had passed & we had to go bcuz I had told Graciella we'd go to see Twilight. We hurried up home, got ready, made calls & off we went. Picked up Sydney & Savannah met us there. Girls had fun & finally we got to see Edward! The girls LOVED him! It was funny to see them react to him bcuz they're only 10 & 11! I won't drop any names... shh! We took Savannah home first, which meant hurry & ask dad, "can Graciella sleep over?" (like now?!) So she stayed & I took Syd home. She's funny that little one! We talked the entire way home!

Sunday was crazy too. I had to pick up Graciella by 10am, Savannah had to go to church & so did we! I get home & had to get girls ready quick! Off we went to the 11am mass. Afterwards, we hit Whole Foods. That store is so neat & full of cool Eco stuff! I love it! The food smelled yummy too. We bought our #6688 rice & a few other things & we were outta there! Ate lunch at In & Out (w/Lele eating her McD's!) Headed home to pick up the puppies & try out the dog park. Not before Graciella was texting & was going to spend a few hrs over at Kaylee's! We drove over to the Avelar's, in the opposite direction, dropped her off & we were back on track! We thought, for sure, Harley would be the big wuss once he was at the dog park, but he surprised us! He & Hugo loved it! Even with a St. Bernard, Newfoundland, bulldogs, Bassett Hounds, poodles, hot-dog-dog... they were all there. Our puppies had fun! It was cute seeing them going in the water, getting their paws barely wet. Hugo was the one who went all the way in to his chest. Harley would go in a smidget further from time to time. Not water dogs yet. We'll see by the summer. Did Lassie ever swim? I can't remember! Our puppies are half the size though. (Shelties)