Right now it's a chilly 37 degrees out. For AZ that's cold! It's only 8am & Antonia left for school all bundled up. But it'll get up to 71 the forecast says. Yesterday was beautiful! Our Xmas lights went up ON TIME. Can't say the same for our tree. However, the girls & I put it up last night, listening to all our Xmas CDs. I got the lights up w/Carlos' help. Today, we'll put on the decs. The girls are looking forward to it! 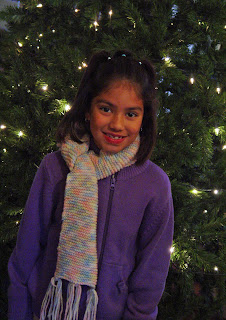 Last night on Cosmo Cricket, I entered a contest w/my most embarrassing teen moment - the first thing that comes to mind was when my mom invited my boyfriend to sleepover, first time thing happened & she woke up early in the am, opened my door, tried to kick the bf, screamed at him & told him to get out. The tears & drama that followed. Yikes! Yeah, I can't believe I confessed that one on their blog! Ha! But now, it's funny!!

Yesterday I watched an episode of Days (from Nov! I'm trying to catch up people!) Well, Nicole was having bad pains - she's pregnant - she was bleeding, more pains... it took me back & pulled on my heart strings. She went to the ER, more bleeding, more pains. She lost the baby girl she called a miracle. It was August of 2000, when the same thing happened to me. I was 5 wks or so & the bleeding started & only got worse. My pains were indescribable. I honestly thought I was going to bleed to death, it wouldn't stop! Carlos was w/me, Thank God! I wouldn't have made it w/out him. I love that man! Only a few short months, after that excruciating visit to the ER - I was pregnant w/Antonia Bella! xo

I have to post some pix from this past wkend. My cousin, Michael & his girls came from Vegas for a visit. Graciella was in the Tumbleweed/Chandler Light Parade w/the San Tan Legacy Soccer Club. I had to string lights all over her! We had fun, but it was packed! Michael & I waited on line for 20-25 mins chit-chatting, waiting for our yummy funnel cakes!

We got our first Xmas cards from the Kruse family! I still have to come up w/a plan for ours! I want to do the picture thing but no time. I also want to make them. No time. It's now the 11th, I'm running out of time!

Hey there Julie! Had fun at the party tonight. It was good to see you. Hope you have a great Christmas.